Transform Your Trellis: How to Train Vines

Whether you’re looking to blanket your garden in charming flowers, cover an eye-sore, or make a big impact with a smaller footprint (think vertical!), vines are the plant for you. Many vines grow in a climbing habit, with long stems and runners that latch onto structures for support. Some cling, others twine, and a few suction onto surfaces to reach new heights. While they may look effortless as they scamper over structures, many of them benefit from extra training to grow just the way you like. Learn how to train your flowering vine to pep up your pergola, create the perfect backdrop, transform trees, or cover a railing or wall. Wherever you choose to grow them, they’re sure to transform your landscape into something spectacular! 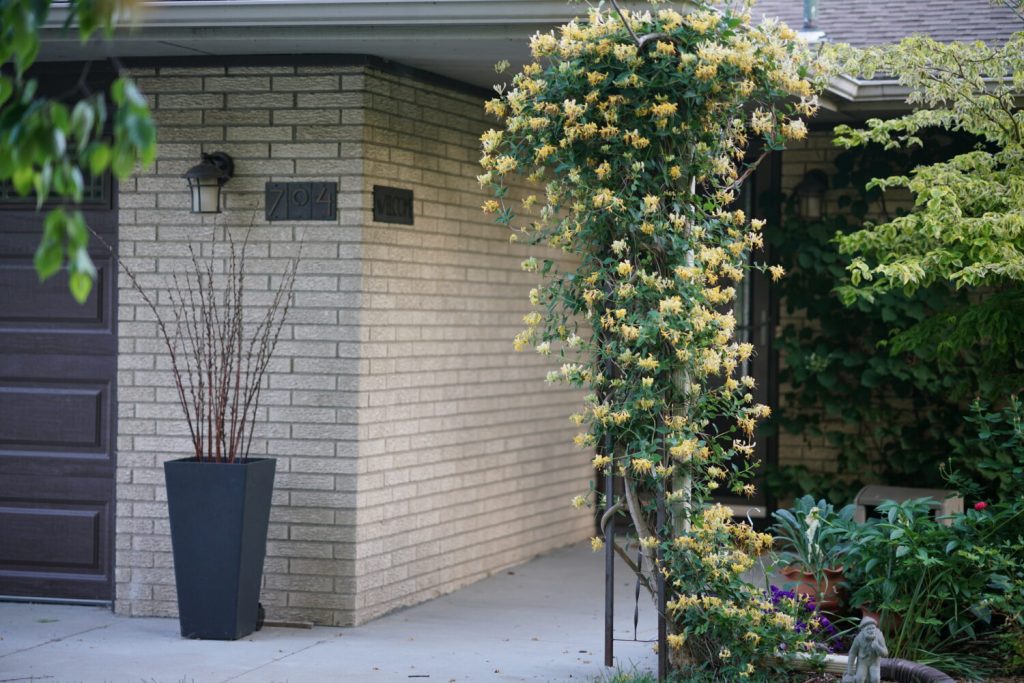 How Do Vines Climb?

You’ve probably seen vines climbing on a variety of structures, like fences, trellises, walls, poles, and trees, but how do they remain upright? There are a few different strategies vines use to attach themselves to surfaces. Identifying which strategy your vines use is the first step in properly training them!

Tendril vines, like grapes, passionflower, and sweet peas, use tendrils to latch onto supports. Tendrils are skinny, leafless, flexible stems that wave in the air until they find a support, then coil around it. Tendrils require some horizontal structure to hold onto, so they can’t climb straight up a pole.

Similar to tendril vines, twining vines climb up structures by wrapping around them. Instead of tendrils, they use either their leaves or stems. Clematis twines with the petioles of its leaves, where young leaves wrap around slim wires, twigs, or string. Because the petioles (or stalk of the leaf) are not very long, the support structure needs to be thin enough to wrap around. Contrary to twining leaves, twining stems can handle larger structures, like poles and thick branches. Twining stem vines (wisteria and honeysuckle) wrap their entire stem around any support they come in contact with. The coolest part? Whether it wraps clockwise or counterclockwise is genetically predetermined for each species.

Ever wonder how plants manage to climb up flat walls? It’s likely because they are using adhesive pads or aerial roots. Some vines, like Boston ivy and Virginia creeper, have touch-sensitive suction cups that allow them to stick to surfaces. The adhesive pads work on nearly every surface, including surfaces that are completely flat! Other climbers, like English ivy and climbing hydrangea,  use clusters of aerial roots (aboveground roots) that emerge from the stem to latch onto surfaces. These small and stout roots really do hold on for dear life, and will likely damage structures when you try to rip them off.

Scampering vines, like climbing roses, aren’t true vines. They don’t have tendrils, suckers, or twine to instinctively climb up surfaces. Instead, they grow with extra-long canes (or branches) that can easily be secured to structures. Their thorns can be used to prop themselves up (ouch!), but it isn’t always effective.

Why Do You Need To Train Vines?

Gravity doesn’t always favor vines. In order to climb upwards, vines must use other structures (or plants!) for support. Their growth is fairly unpredictable, as they grow in search of the nearest support, no matter the direction it is in. If it doesn’t manage to find the support it needs, it will grow along the ground. Therefore, untrained vines may look a little unruly at times. Train your vines to grow on the support structure you like, in the direction you like! 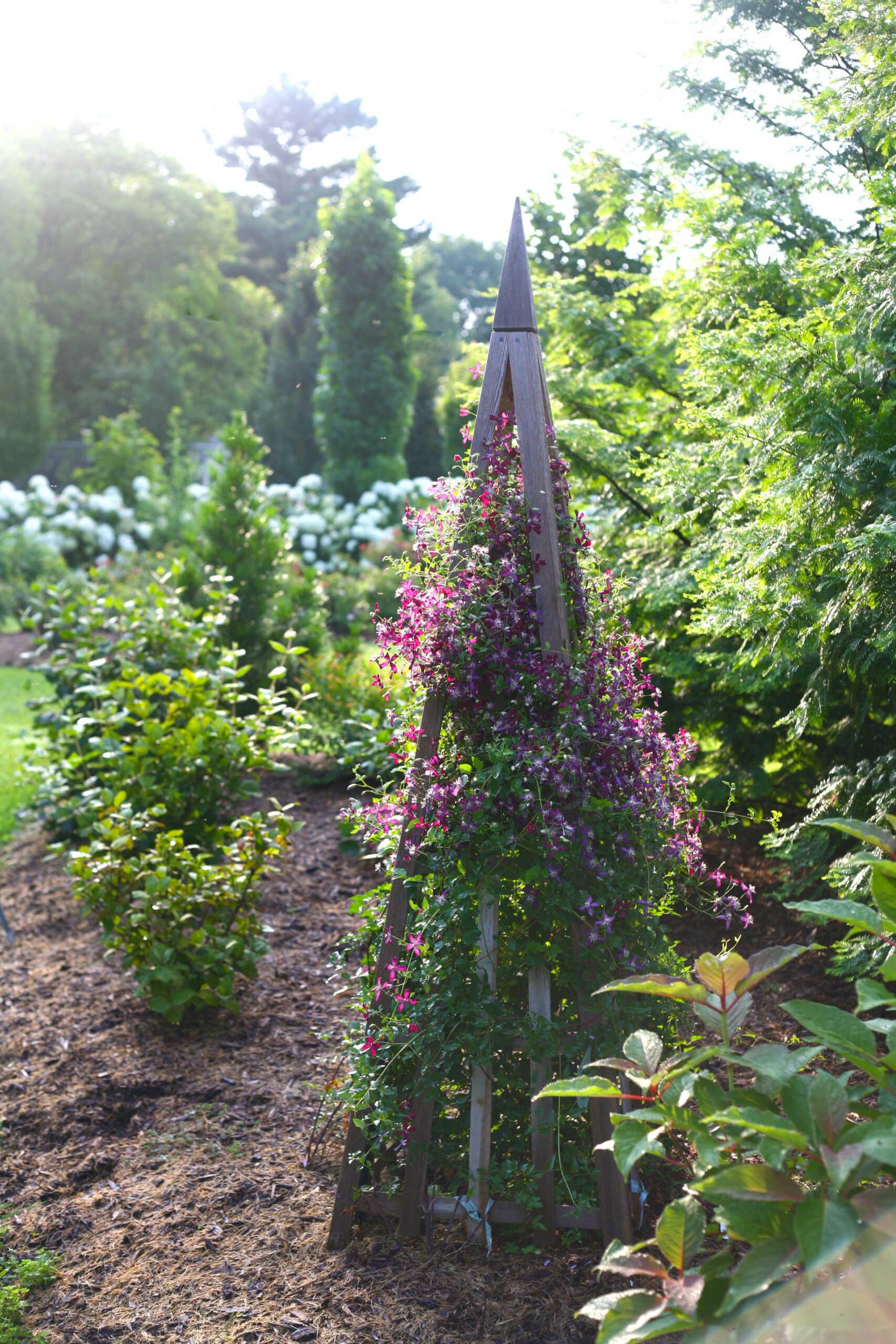 How to Train Your Vine

There are a few ways to train your vines on a structure. While some of them only need a push in the right direction (literally, just tuck them where you want!), others need extra hardware.

Leaf twining vines rely on supports that are narrow enough for their leaves to wrap around. If you think your trellis, pole, or fence is too thick for your vine, don’t worry! You can always add string, chicken wire, or bamboo poles to your support to ensure they have something to latch onto. One of our great gardeners, Laura (@howsitgrowingnj), tackles this problem with a combination of fishing line, paddle wire, and landscape staples!

The light post at the front of Laura’s house is too large for Pink Mink clematis to wrap around, so in this instance, she uses paddle wire in conjunction with a landscape staple to provide more support. The landscape staple anchors the paddle wire at the base, while the wire runs up and down the pole. The wire is small enough to look inconspicuous but is large enough to support the clematis year-round.

Wires and strings can be added to nearly any structure. If you love the look of vines climbing a wall, but know your twining vines can’t do it, just add wire! There are many wall trellis kits that can be used to transform a flat wall into a jungle gym for vines. 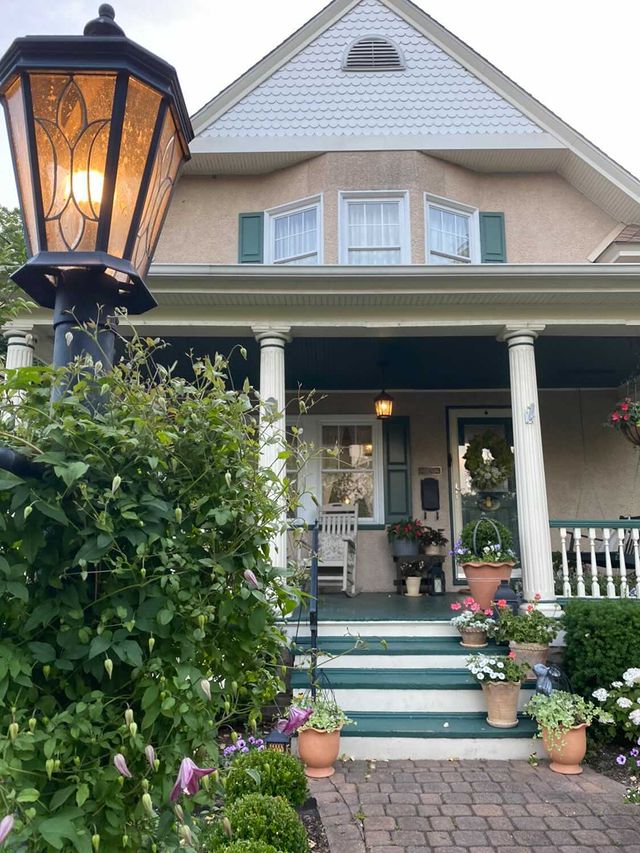 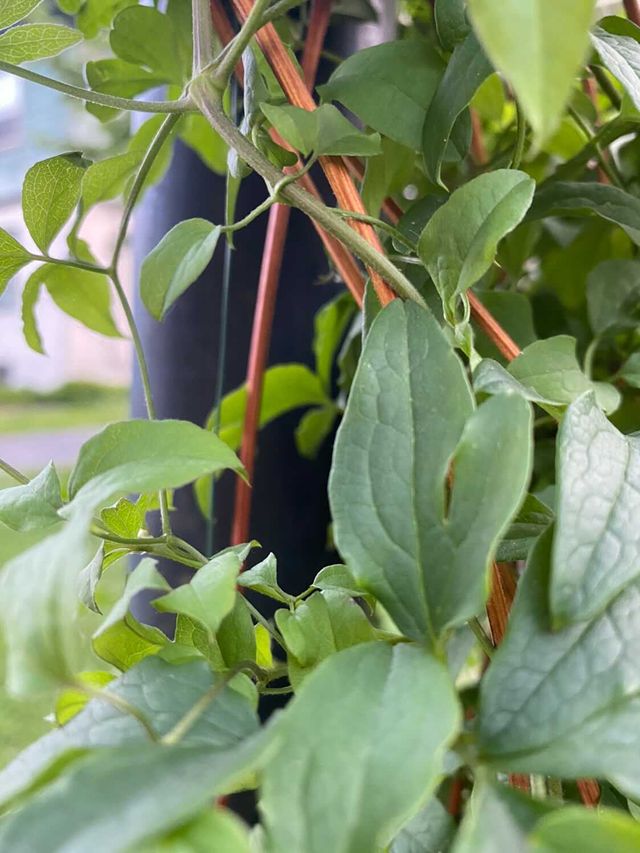 Instead of using wires or strings, you can attach your vines to larger structures with ties and rubber bands! Michelle (@gardensandchickens) uses rubber ties to attach her clematis to a thick trellis. Use rubber ties like a tendril, wrapping them around the structure and stem for support. Ensure they are tied gently, as stems expand as they grow. Ties that are too tight will likely cut into the vine and damage it. Some vines will only need support from ties temporarily, others will need them the entire time they’re growing (climbing roses, we’re looking at you). 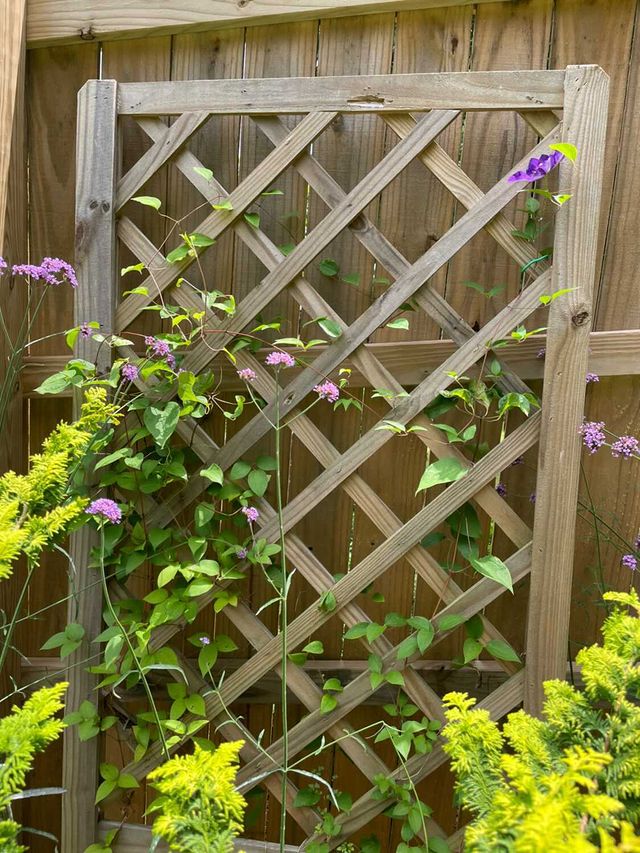 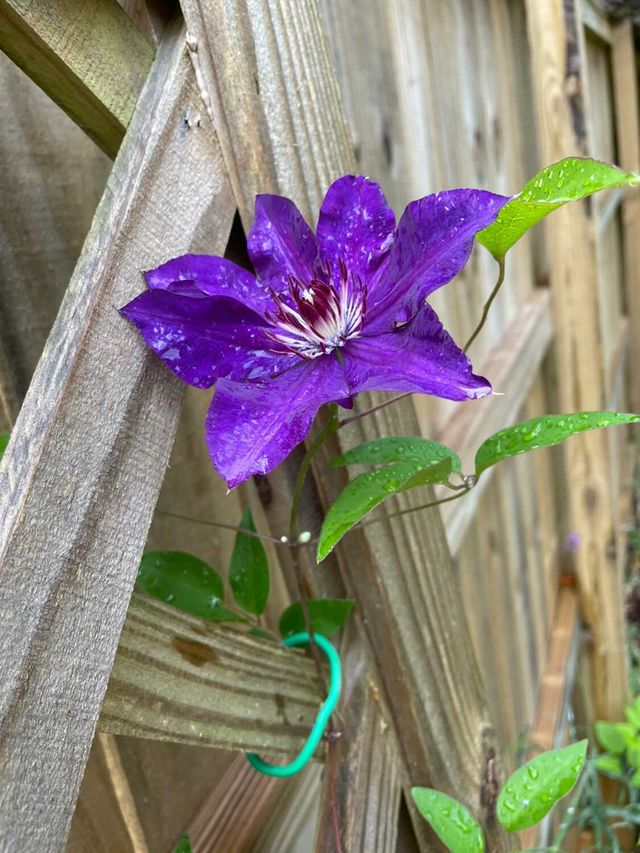 Interested in building your own trellis on a budget? Check out this video from Roxana (@soilandmargaritas) on how to create a trellis using branches from other plants in your garden! In this video, she uses the branches from pruning her hydrangeas in the spring.

Questions, comments, or concerns? Let us know! We have an experienced, knowledgeable staff ready to make sure your garden turns out perfect. Or check out our other blogs, here.

5 Easy Tips for Protecting Your Potted Plants This Winter 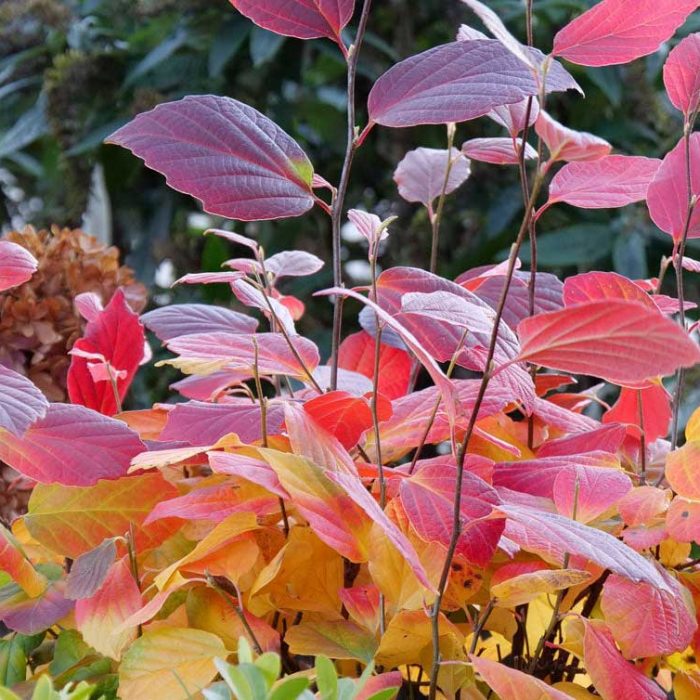 Our Guide for Fall Planting

The start of fall may signal the gardening season is coming to a close, but it’s not over yet! There is still plenty of time to enjoy colorful flowers... 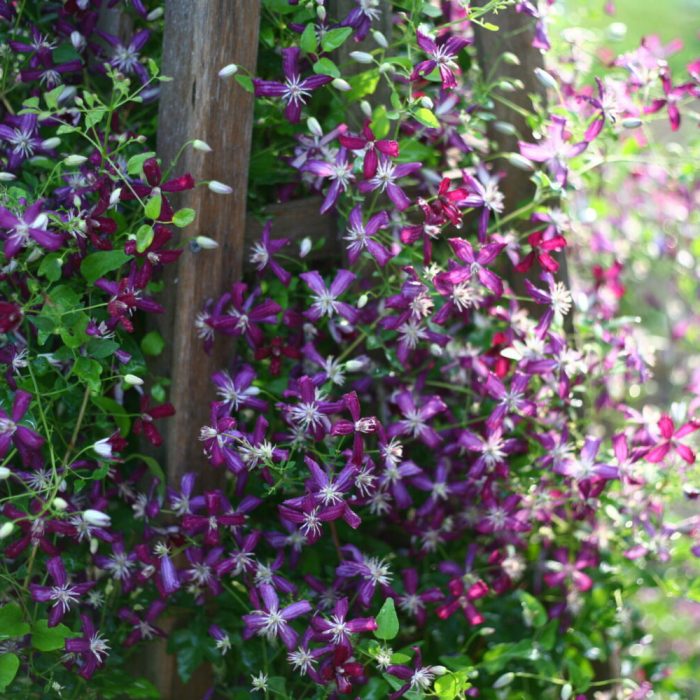 Transform Your Trellis: How to Train Vines

Whether you’re looking to blanket your garden in charming flowers, cover an eye-sore, or make a big impact with a smaller footprint (think vertical!), vines are the plant for... 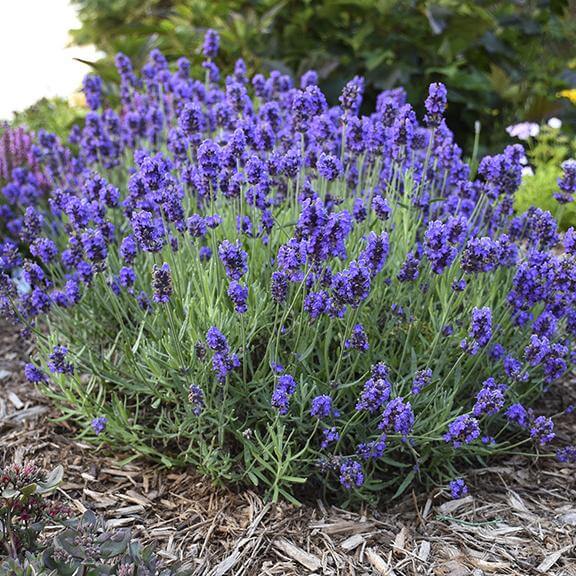 It is said that the scent of lavender relieves stress – but as many people will tell you, the idea of growing it does just the opposite. Many have...

We are always here to lend a helping hand.